We live in an age of instant information. Has a major event happened somewhere in the world? In the twinkling of an eye it is streamed, tweeted and live-tickered to every corner of the globe. Has a war broken out? A volcano erupted? A plane crashed? A ship stranded in the Suez Canal? We know it within minutes. We call this “real time”.

This strange realm of “real time” is also the land of instant coffee, fast food, real-time stock prices, express deliveries and just-in-time logistics. Its followers sometimes claim that “time is money”. This is the fertile ground in which the dream of instant automatic translation takes root and grows. Services such as Google Translate, DeepL and others are immensely popular, and it is claimed that the vast majority of language translation which is done in the world today is carried out by “machine translation”.

Is there an alternative to this expectation of an instant culture? I am reminded of a character in the epic novel and film trilogy “Lord of the Rings”. Treebeard looks like a tree but can move about, he is a “tree-herder” or “Ent”. In the book and film he explains his idea of communication to the hobbits:
“You must understand that it takes a long time to say anything in Old Entish. And we never say anything unless it is worth taking a long time to say“.
That contrasts sharply with our impatient and short-lived culture. It is worth remembering some pioneer translators who took a long time to complete major translation projects. 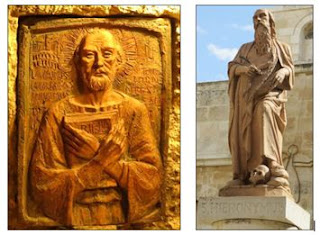 Jerome lived and died over 1600 years ago. He was a priest in the Catholic church, but today he is better known for his translation of the Hebrew Old Testament into Latin. This project, the Vulgate, took 17 years from 382 to 405, and during this period he lived in Bethlehem - in the country where the language of the original texts was spoken. He is commemorated in a wood carving in the crypt of the Church of the Nativity and a statue outside the Church of St. Catherine, which I photographed in Bethlehem in 2017.

Jerome died on 30th September 420 in Bethlehem. This day is now celebrated each year as International Translation Day. Many modern translators can relate to Jerome’s international biography. He was born in an area north of the Adriatic Sea (now in Croatia or Slovenia) and later spent time in Rome, Antioch (Syria), Jerusalem and Alexandria (Egypt). He moved to Bethlehem when he started his monumental translation. This helped him to learn the language of the original manuscript better, because he had to use it regularly in everyday life. Many modern translators also live in the country of their acquired language. I am one of them: I come from England but have been settled in Germany for very many years. And Jerome’s perseverance, working on a single translation project for many years, is also something that many translators can sympathise with. 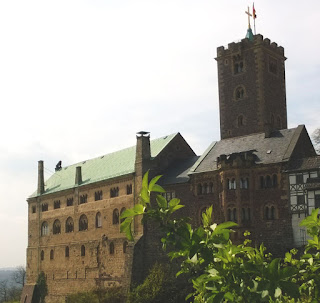 Martin Luther lived in Germany from 1483 to 1546. He is perhaps best known for his role in the Reformation and for the founding of the Protestant church in Germany. But he is also remembered as a translator. His German translation of the Bible was widely published, and it is still used in a revised form today. Luther’s translation even influenced the development of the modern German language. He did much of the translation work while he was in hiding at Wartburg Castle near Eisenach.

Luther was determined to translate the Bible into the language of the common people. This drew criticism from some conservative scholars of the time, and in 1530 he wrote the “Sendbrief vom Dolmetschen”, a letter in which he justified his work and explained his methods. For example:

“In my translation I have taken great care to write pure and clear German. We often had to spend a fortnight or three to four weeks searching for a single word, and even then we sometimes didn’t find it. We should not use Latin ideas when we speak German, we should ask mothers at home, children on the street, the common man on the market. We need to listen to them and learn how they speak. Then we should translate so that they will understand it.”

As translators today, we have on-line and off-line resources which Jerome and Luther could not imagine even in their wildest dreams. Sometimes our tools can help us to translate texts far more quickly. But sometimes we, too, need to take our time, explore the subject matter of our texts and search for creative ways to convey the content of the original. As Treebeard said in the Lord of the Rings:
“We never say anything unless it is worth taking a long time to say“.

Dear translation colleagues, is the content of our translation projects really worth taking a long time to say?

Posted by Victor Dewsbery at 21:12